Gage Cannabis Co. is about to bring a high-end marijuana experience to Ferndale 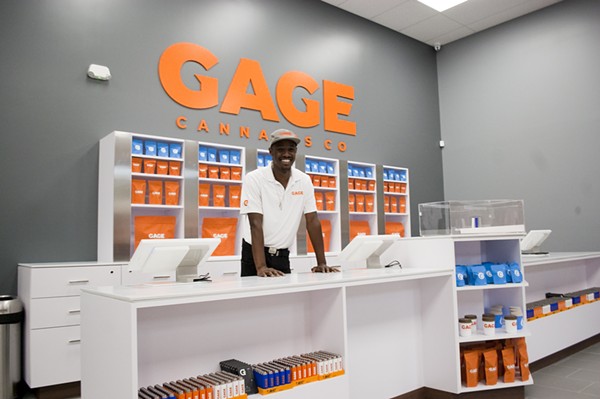 Metro Detroit marijuana aficionados are in for a new experience when Gage Cannabis Co. opens its doors to the public next month.

The nascent cannabis company recently wrapped up construction of its first flagship store in Ferndale, transforming a warehouse in the industrial part of town into what looks like from the outside like it could be a big-box retail store. Inside, everything feels hip and high-end: Guests are greeted by a street art-style selfie wall, a refrigerator with free water bottles emblazoned with Gage's bright orange logo, and a reception desk and waiting room with sleek couches and chairs. Even the name, "Gage," is jazz-era slang for pot, explains Donnell Cravens, the regional retail manager for the brand.

"I've been to countless other dispensaries in the area, and you do often get an almost uninviting vibe," says Cravens, who previously worked as the general manager for Detroit's Utopia Gardens provisioning center. "That's what the initial intake area here is supposed to be — a welcoming landing place, [someplace] that you would feel comfortable sending your mother or whoever."

Beyond the reception desk is Gage's main retail floor, what Cravens describes as a "store within a store." The retail floor is clean, with bright colors and electronic dance music thumping in the background. Unlike other provisioning centers, Gage's products aren't behind a jewelry store-style glass case. Instead, there are hexagonal tables topped with jars containing strain samples, which customers can inspect up close — the jars even come with magnifying lenses and holes built into the lids for a sniff sample — and there are informational cards at hand with the strains' THC levels and terpene profiles.

Like some other marijuana provisioning centers, Gage is moving to destigmatize the marijuana shopping experience in other ways, too. For one, they're eschewing the term "budtender" for "product specialists," who are paired with shoppers for a one-on-one experience. The product specialist takes the shoppers' order on the floor, and at the end escorts the customer to a large cashier counter in the back to pick up the products and cash out. In the end, Gage's layout calls to mind the experience of shopping at an Apple Store instead of what many customers might associate with a marijuana provisioning center.

Cravens says Gage's products are fully vertically integrated, and grown in small batches in the company's four cultivation centers, which total 150,000 square feet across facilities in Monitor Township, Harrison Township, Lenox Township, and Warren. The company is poised to be one of Michigan's biggest players, having secured 20 "Class C" cultivation licenses. But Cravens says the focus is on quality, not quantity.

"A lot of other large cultivators will drop 200 or 300 plants in a room, or even a thousand plants in a room," Cravens says. "We won't do that because it's too hard to control and inspect and maintain the quality level that we like. So we do a smaller batch, which is more time-consuming and more labor-intensive, but it produces a much higher quality product."

In another distinction, Gage will also be the exclusive Michigan retailer of Cookies, the California-based marijuana company owned by Gilbert Milam Jr., aka Mexican-American rapper Berner, who has developed his brand into a line of cannabis products and a popular streetwear line. Cravens says Gage will soon open a separate Cookies-branded store on Eight Mile Road in Detroit.

When we visit, Gage has bused in employees from a sister location set to open in Adrian next month for a week of corporate training. As we tour the floor, the crews had just wrapped up a training exercise where they play the roles of customers to help familiarize each other with explaining Gages' products. Cravens says the company plans to hire 100 employees across its stores by the end of the year, and additional provisioning centers are also in the works in Detroit, Battle Creek, Bay City, Buena Vista, Center Line, Grand Rapids, Kalamazoo, Lansing, Traverse City, and Lenox Township, among others. Despite the "Gage Cannabis USA," moniker on his business card, which hints at national aspirations, Cravens says Gage "is very much a Michigan company," with its founding members all having Michigan ties.

As with Michigan's other marijuana provisioning centers, Gage Ferndale will initially only open to medical marijuana card-carriers ages 18 and up; recreational adult-use retail stores aren't expected to open in Michigan until early next year, but Cravens says the company is on track to get its licenses as soon as possible.